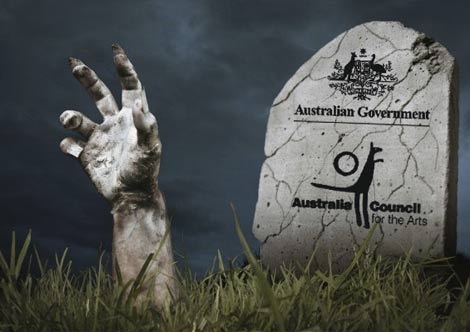 Mitch Fifield, Australia’s Federal Arts Minister, has announced the cancellation of the entire Catalyst funding program and the return of approximately $60 million in funding to the Australia Council. So are all our funding woes over? Is the future of Australian Arts assured?? You must be joking! It’s only proved that the Australia Council is the new and original Catalyst.

Is there any good news?

Well, a pile of taxpayer money will be moved from the Arts Ministry’s application assessors back to those from the Australia Council. So a minor saving in bureaucrats. Artists and arts organisations need now fill only one set of grant forms again instead of two – innovation! Merely a single rejection letter to rely on if you don’t qualify, so saving at least one ream of letterheaded paper.

The Australia Council will also probably re-institute a few of their original funding streams, though the focus will inevitably stay on 1-2 year options, to keep the leash tight on artists and organisations. The idea/fantasy of arms length funding has returned. But what a hollow concept that is. Government set criteria and guidelines will continue to control who gets arts funding. Get back in your box! The Australia Council has shown no independence of thought or action at any time during this debacle, for which it’s now rewarded.

But there’s more! No reprieve for the hundreds of small/medium sized community organisations that have closed across Australia over the last 2 years.

The ministry will hold onto a few million for discretionary use. The annual 3% efficiency dividends reduction however, will now start biting into the Australia Council ($9 million over the next 3 years!) alongside our museums, galleries and heritage organisations. This action alone, compounded over the next decade, will be disastrous. Less opportunity, less money, less respect. The Arts in Australia is going to continue its descent to complete insignificance.

The only real winner is Mitch Fifield – now able to wash his hands of the whole debacle known as ‘The Arts Sector’.

Mr Fifield, I’m sure, has found managing the Arts in Australia vexing in the extreme. Passion but no leadership. Since the beginning of his tenure, he was expecting the Australia Council to ask for the money Brandis took, to be returned. Amazingly, they never did. Instead he’s had to endure almost two years of criticism. To nullify the issue he has now, essentially, forced the money back on them, so that he can focus on the ‘real’ work of his ‘communications’ portfolio.

What this entire episode has shown is that the Australia Council is an organization without the teeth or the courage to stand up for the sector, never mind Australian audiences.

It is simply not the Council’s job to lead or advocate, merely to disburse taxpayer cash to far too few, based on government-set guidelines.

The money has been returned because;

So who is going to stand up to this, and make fixing all this into a real issue?

If you want to see a real voice for the Arts in our politics, then you need to support The Arts Party. Become a member today. At least, subscribe to our other social channels.

Australia needs a dedicated independent voice for the Arts in our democracy.

Creating that voice is our mission. Our parliaments are crying out for some constructive, collaborative and creative Arts sensibility in their running.

The Arts also need a clear strategic plan that develops artists, audiences and communities in the short, medium and long term – a plan that will then be implemented. They must be placed at the centre of the future vision for this country, starting with our education system.

We exist to make these things happen. Nothing changes if nothing changes – and that change will not occur through the work of the Australia Council.

Only voting together will give the Arts a real voice in our parliament.