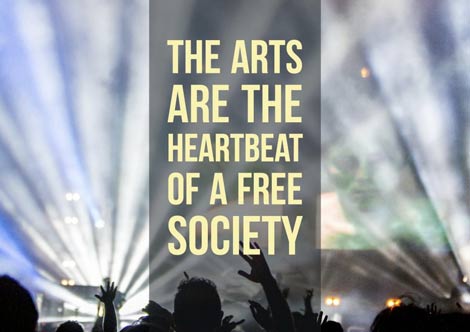 At the last Federal Election, Arts Party senate candidates received a top 6 preference vote from almost 1.4 million Australians (1,372,827 to be exact), that’s more than 10% of all voters. In total, when lower house candidates are also included, The Arts Party received a preference from well over 1.5 million Australians. These insights have come from analyzing the raw formal preference data released by the AEC a few weeks ago. 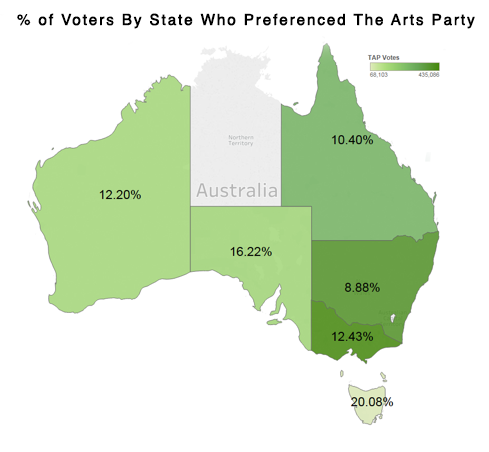 PJ Collins, Leader of the Party said “We set a target at the beginning of this year to see if we could get a million votes for the Arts and we’ve completely smashed that. We frankly never expected a result of this size. The scale of this outcome, given the extremely limited resources we had, is remarkable.

This result is a huge vote of support for Arts organisations and workers across the country, at a time when government funding and investment in the Arts has become a very low priority. Every week small-medium sized arts organisations and community groups are closing for good.

The Australian people clearly value the Arts in all its forms and want to see them supported by our government.”

The Arts Party stood a total of 20 candidates at the election, 13 for the senate and 7 for the House of Representatives, across 6 states. Its purpose is to encourage a more creative, cultural and educated life for every Australian. The party was entirely crowdfunded and had a national campaign budget, after paying to stand candidates, of less than $30,000.

The Arts Party currently has over 2000 paid members and also celebrates its second birthday, as a registered party, this week.

The largest state vote came from Victoria, with a 1-6 vote preference coming from 397,478 people (11%), while as a percentage, Tasmania came out on top, with 17% of voters preferencing the Arts Party 1-6.

Collins continued “Rather than embracing the creative future we need, and placing the Arts in the centre of the Innovation and Future Agenda for this country, the very opposite is occurring. Yet while few Australians are aware of the damage the government funding cuts of the last 2 years are having on access and opportunity for us all, they have clearly shown, through voting, their support for the Arts.”

Collins continued “We want to see our current government acknowledge this clear message of support, from Australians everywhere and respond to it by increasing their investment in the Arts in all our lives, in our schools, and our communities. We call on them to reverse the cuts and reassess their treatment of the sector.”

To finish, Collins said “The arts are the heartbeat of a free society. Artistic and creative thinking are the essence of human progress. They are key to our economy, to our identity and to our happiness as a people.

This is not an Arts sector voting for itself, rather it is the Australian people showing their support for the Arts sector. The Arts Party will continue to channel and encourage that support, to help create a better future for us all.”